Romsley Parish Council have teamed up with West Mercia Police to make Romsley a “We Don’t Buy Crime” village by supplying all households with a SmartWater® kit to protect their homes. SmartWater® is an easy-to-apply liquid that enables the Police to trace valuables back to the owner.

A “drop in session” was recently held where villagers could collect their kits. Councillor David Powell said “the drop-in session was a great success where we broke all records for a launch as part of the “we Don’t Buy Crime” project. We are also allowing residents to collect packs at our next Parish Council meeting and arranging further opportunities to collect packs in the future.

The Parish Council have utilised grants and part funded the cost of the packs to provide them free of charge. Our aim is to ensure that every household in Romsley is equipped with a Smartwater pack. There will also be signage installed in the village to send a clear message to criminals that Romsley are united and determined to protect our valuables against acquisitive crime.
Romsley residents can find more information on the Smartwater project by contacting Romsley Parish Council https://romsleyparishcouncil.gov.uk or 07907 976915 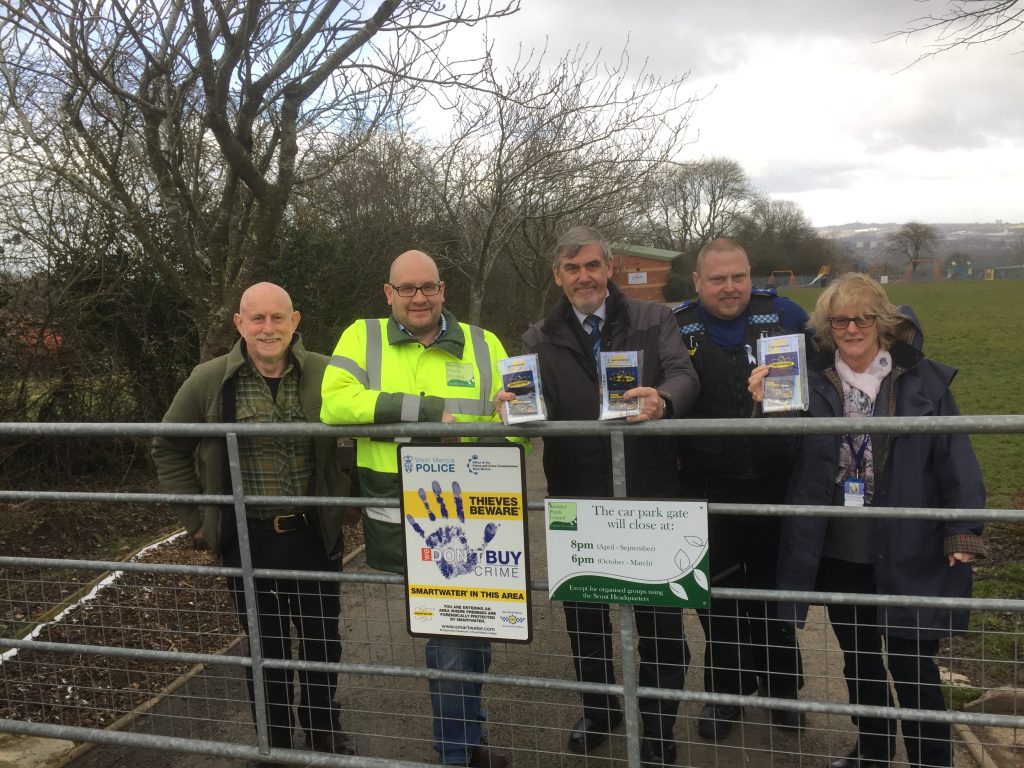 A meeting took place in the village last week between some representatives of both Hunnington  and Romsley\’s Parish Councils and two representatives of West Mercia Police, namely Inspector Sarah Cotten, from the SNT( Safer Neighbourhoods Team) and local PC Tim Burling.

This was a very productive meeting and as a result several initiatives are being explored:

We were made aware of the following Scam by our Police Liaison Officer.  Please be careful when using your personal details.

Beware  of people bearing gifts. The following is a recounting of the incident from  the victim:

“Wednesday  a week ago, a friend had a phone call from someone saying that he was from some  outfit called: “Express Couriers”. ( The name could be any courier company. )  He asked if she was going to be home because there was a package for me that  required a signature .

The  caller said that the delivery would arrive at my home in roughly an hour. Sure  enough, about an hour later, a uniformed delivery man turned up with a  beautiful basket of flowers and a bottle of wine. she was very surprised since  there was no special occasion or holiday, and she certainly didn’t expect anything like it. Intrigued, she inquired as to who the sender  was.

The  courier replied, “I don’t know, I’m only delivering the package”. Apparently,  a card was being sent separately. ( The card has never arrived! ) There was  also a consignment note with the gift.

He  then went on to explain that because the gift contained alcohol, there was a  £3.50 “delivery/ verification charge,” providing proof that he had actually  delivered the package to an adult ( of legal drinking age ), and not just left  it on the doorstep where it could be stolen or taken by anyone, especially a  minor.

This  sounded logical and she offered to pay him cash. He then said that the delivery  company required payment to be by credit or debit card only, so that  everything is properly accounted for, and this would help in keeping a legal  record of the transaction. He added couriers don’t carry cash to avoid loss or  likely targets for robbery.

Her  husband, who by this time was standing beside her, pulled out his credit card,  and ‘John,’ the “delivery man” asked him to swipe the card on a small mobile  card machine with a small screen and keypad. Frank, her husband, was asked to  enter his PIN number and a receipt was printed out. He was given a copy of the  transaction. the guy said everything was in order, and wished us good  day.

To our  horrible surprise, between Thursday and the following Monday,  £4,000 had  been charged/withdrawn from their credit/debit account at various ATM  machines.

Apparently  the “mobile credit card machine,” which the deliveryman carried now had all  the info necessary to create a “dummy”  card with all their card details  including the PIN number.

Upon  finding out about the illegal transactions on the card, they immediately  notified the bank which issued us a new card, and our credit/debit   account was closed.

They  also personally went to the Police, where it was confirmed that it is  definitely a scam because several households had been similarly  hit.

WARNING:  Be wary of accepting any “surprise gift or package,” which you neither  expected nor personally ordered, especially if it involves any  kind of  payment as a condition of receiving the gift or package. Also, never accept  anything if you do not personally know or there is no proper identification of  who the sender is.

Above  all, the only time you should give out any personal credit/debit  card  information is when you yourself initiated the purchase or  transaction!”

Romsley had a successful Neighborhood Watch (NHW) scheme running for many years and the Parish Council would like to get it up and running again.
NHW is a partnership which involves the police, community safety departments and local residents who all work together to make their neighbourhoods better places to live. It aims to help people protect themselves and their property and reduce the fear of crime by giving advice on home security, promoting vigilance in spotting and reporting suspicious incidents and fostering greater community spirit.

The Parish Council will look to support the costs of this scheme and will provide a dedicated page on the Council website for information on home and personal safety and any anti-crime initiatives affecting the Parish.
We will need a number of volunteers to help support this important initiative in our community, if you are interested in helping please contact the Clerk to the Council who will pass your details on to Councillor Lesley Gray.